What is tongue tie?

Tongue tie describes the presence of a frenulum that restricts the tongue’s ability to reach out and grasp the breast for successful breastfeeding.

The most profound anterior tongue tie is one that connects the tip of the tongue to the edge of the gum. These babies have a V- or heart-shaped tongue when they cry, cannot extend their tongue at all, cannot follow a finger tracing along their bottom gum, and cannot generally latch well. Tongue ties can occur all along the spectrum of the tongue and the floor of the mouth, and some are hidden under the surface layer of skin, which we call “posterior tongue tie.”

The role of the tongue in breastfeeding 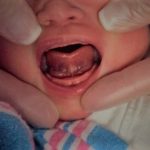 The tongue is incredibly important in breastfeeding. The baby must reach out with his tongue and grasp the breast. The tongue forms the primary seal, preventing milk loss and air intake. The movement is intrinsic to the tongue. Rather than sawing the tongue in and out, the muscular impulse starts at the tip of the tongue and moves inward, moving milk from the breast into the mouth. The middle of the tongue acts to form the milk into a ball, and the back of the tongue is responsible for coordinating swallowing, raising the larynx so that milk is directed down the esophagus and not down the trachea into the lungs.

What happens when a baby is tongue tied?

Tongue tie interferes with this intricate coordination in many ways. Some babies cannot extend their tongue. Those babies will have difficulty finding and attaching to the breast, but they may be able to nurse if the nipple is placed in their mouth just right. These babies come off the breast easily and become frustrated because they cannot adjust the position of the nipple in the mouth. The babies who are so tied they cannot extend their tongue over their bottom gum will reflexively clamp their gums. To the nursing parent, this pressure can feel like biting, and can damage nipples incredibly quickly, causing cracking, bleeding, pain, and because the skin is now broken, infection.  

Some babies can extend their tongue against the “rubber band” of the tongue tie, but their tongues “snap back” frequently. This can feel like a sawing against the underside of the nipple, and that friction can also damage nipples. These babies tire easily, because their feeding is made more difficult by the resistance of the rubber band. Snap back can sound like clicking. Clicking can also be caused by loss of suction from the underside of the breast. The tongue should stay mostly in the middle of the mouth when breastfeeding, with the jaw opening to create suction in the middle and back of the mouth. If, when baby opens her jaw, the tongue is tied to the bottom of the mouth, her tongue will snap away from the breast, losing suction.

Some babies can extend but not cup their tongues. These babies generally mash the nipple against the roof of the mouth, causing flattened, ridged nipples. Others thrust their tongue against the nipple instead of reaching under it, which leaves the nipple looking like a lipstick applicator.

What is a frenotomy?

Frenotomy refers to the procedure where this tongue tie is released (or in some places, “revised”). Though not all providers perform this procedure, providers from many different specialties have been known to offer it: pediatricians, family practice doctors, ear nose and throat specialists, dentists, and some midwives. For most, it is a simple, in-office procedure that Dr. Sunita Iyer provides here at ENM.

Please call to schedule first office visits.
If you're a current patient, please log on to our EHR to request a visit online. Please make sure to write multiple available days/times.

Please remember that legally you MUST wear your mask in the building.